Home › Sports and Recreation › The Basketball Eyes of Isaiah Austin: “Your Excuse or Your Story?”

The Basketball Eyes of Isaiah Austin: “Your Excuse or Your Story?” 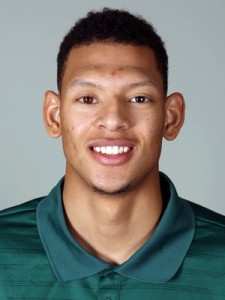 Isaiah Austin has two eyes. Only one of them works.

He had a decision to make. That decision would determine his future.

Would he go with the bad eye, or with the good one?

An AP news piece tells the story. At about twelve years old, Austin got hit in the eye with a baseball. He didn’t lose sight in that eye then, but the accident did loosen his retina. Two years later, when he was in eighth grade, the retina detached when Austin, then 6’7″ tall, dunked the ball while doing his usual warm-ups for a middle school basketball game. Four surgeries later, it became clear that his right eye would never see again.

As he tells it, his biggest fear during that year of unsuccessful surgeries was that his days of playing basketball were over. He asked his mother, Lisa Green, “How am I going to get through this?”

The challenge of those words, spoken to him out of love, became the touchstone that helped him to put his life back on track.

Soon he was back out on the basketball court, struggling and working to learn how to shoot and how to play without his former depth perception.

Isaiah Austin had decided to go with the good eye.

But that didn’t mean it was going to be easy.

Though he did resume his course toward what he hoped would be a future professional basketball career, Austin now had a secret. He played basketball through high school, and played well. It didn’t hurt that he continued growing until he was 7’1″ tall. He had the height advantage, and he worked hard to compensate for the fact that his depth perception was compromised and he had no peripheral vision on his right side.

Still, he feared that if his secret were known, the college and NBA (National Basketball Association) scouts would pass him by.

Yet a few people did know he had sight in only one eye. It didn’t stop Baylor University in Waco, Texas, from picking him up for their college basketball team. As reported in the Baylor Lauriat, he did very well for his team during his freshman year.

In fact, were it not for a torn labrum in his shoulder, which required therapy and recuperation during the following summer, he might have been picked up by the NBA after his freshman year. Instead, he went on to play a second year of basketball at Baylor, while continuing his studies. A recent article in the Star-Telegram recounts the ups and downs of his performance on the court and in his personal life.

It was just this year, during his second year at Baylor, that Isaiah Austin decided it was time to go public with his story. It came out in this powerful piece, originally aired in an ESPN feature on January 17, 2014, during the broadcast of a Baylor Bears basketball game:

The response was immediate . . . and very positive. Support and appreciation began pouring in from all directions. As Austin had hoped, many parents, teens, and children found inspiration in the story of a young man who overcame partial blindness to continue a stellar basketball career. His story is giving hope to others who struggle with vision loss or other obstacles.

Isaiah Austin had taken his mother’s words to heart.

He was not going to make any excuses.

He was going to tell his story.

Now, he no longer had to hide his secret or fear it would sideline his basketball career and his life. He could be exactly the person he is—and an inspiration to others.

The choice of life or death

Baylor University is a Christian college. Isaiah Austin is a young man of faith. He looks to God for help and inspiration, and he wants to use his gifts to help and inspire many other young people.

He probably knows that his mother was not the first to put such a challenging choice before someone she loved.

In the book of Deuteronomy, the Lord, the God of Israel, said these words to the people whom he loved:

But if your heart turns away and you refuse to listen, and so are misled, worshipping other gods and serving them, I am telling you right now that you will definitely die. You will not prolong your life on the fertile land that you are crossing the Jordan River to enter and possess.

I call heaven and earth as my witnesses against you right now: I have set life and death, blessing and curse before you. Now choose life, so that you and your descendants will live, by loving the Lord your God, by obeying his voice, and by committing yourself firmly to him. That is how you will survive and live long on the fertile land the Lord swore to give to your ancestors: to Abraham, Isaac, and Jacob. (Deuteronomy 30:11–20, emphasis added)

Isaiah Austin’s choice was not literally between life and death. But it was a choice between the life or the death of his dream. 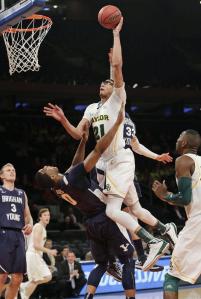 It was a choice between the life or the death of the basketball player he wanted to be.

It was a choice between the life or death of the person he wanted to be.

If he had let his sightless right eye defeat him, and used it as an excuse for why he couldn’t press forward with his dreams and his life, it would be a choice for personal death and despair.

Instead, he chose to get the most from his sighted left eye . . . and from the rest of his body, mind, and heart. This was not only a choice for the life of his dream. It was a choice that is now bringing hope, inspiration, and excitement to many others struggling with their own handicaps, both physical and emotional.

It is a choice that will make the impact of his life greater than it might have been if he had gone into his basketball career with two fully functional eyes.

As quoted in the AP story, Austin said, “I want to be somebody that some kid looks up to saying if he can do it, then I can do it. I just want to push the youth and help people grow. I really can tell people that even with a disability you can make it.”

Our own life and death choices

Each of us faces our own life and death choices at various times in our life. Those choices are different for every one of us. But when we face them, we are deciding whether our life will go up or down.

What choices have you faced in your life?

What are the decisions you have had to make—or may have to make right now—that will determine whether you will lapse into depression and excuses for the life you missed, or make it possible for you tell the inspiring story of the good life you worked for against all the obstacles you faced?

These choices may or may not be choices between the life and death of your body.

But they are the choices we make between the life and death of our spirit.

Update: If you would like to purchase an Isaiah Austin “Dream Again” Limited Edition Tee Shirt to benefit the Marfan Foundation, visit The Official Website of Isaiah Austin.

2 comments on “The Basketball Eyes of Isaiah Austin: “Your Excuse or Your Story?””