But it did bring down a U.S. passenger plane.

Well, yes, the Knee Defender didn’t actually bring down the plane. But this weapons technology was deployed in the border skirmish that brought the plane down.

Okay, okay, let’s get technical. It’s not really weapons technology. It’s a little gizmo that can be used on a passenger airplane to prevent the passenger in the seat in front of you from reclining. It was deployed for that purpose in the border skirmish that brought the plane down.

Yes, it was a border skirmish that brought the plane down. That’s my story, and I’m sticking to it!

The boundary battle that brought down United Airlines flight 1462

Here’s what happened according to the AP story: 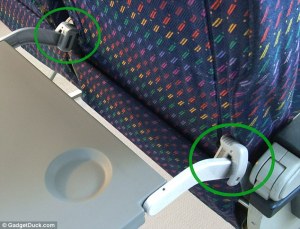 On Sunday, August 24, 2014, United Airlines flight 1462 was making its regularly scheduled flight from Newark, New Jersey to Denver, Colorado. The man in seat 12B, a center seat, placed the Knee Defender device on his tray table arms to prevent the woman in front of him in seat 11B from reclining.

She was not pleased.

Although there is no U.S. law against the device, its use is prohibited by most major U.S. airlines, including United. Accordingly, a flight attendant asked the man to remove the Knee Defender.

The woman then took matters into her own hands. She stood up, turned around, and threw a cup of water into the man’s face.

That’s when the flight crew decided to divert the plane for an unscheduled landing at Chicago’s O’Hare International Airport.

The two passengers were escorted off the plane by city police and Transportation Security Administration (TSA) officers. Though they were not charged with any crime (it was considered a “customer service issue”), they were also not allowed to re-board the plane and continue the flight to Denver—which arrived over an hour and a half late due to the unscheduled landing.

For other reports on the incident, along with strategic analysis, click here and here.

Now, I call that a border skirmish. Yes, it involved only two people, not whole nations, and the factions and militias that our world is so full of these days. But it’s the same issue on a smaller scale: people fighting over the boundaries between my space and your space.

I remember the same battles going on among my siblings during the most argumentative times of our childhood. The youngest were relegated to the middle seat of our nine-passenger car. (I come from a big family!) In that seat, there were boundaries clearly demarcated by screws and grommets between my territory and your territory. If an errant hand or foot went over that boundary even by an inch, it was all-out war!

It’s the same thing those two airline passengers were fighting about, causing the plane to go down for an unscheduled landing.

What, really, is the difference between that and Malaysia Airlines Flight 17 being shot down over Ukraine in a border war involving the Ukrainian government and pro-Russian separatist fighters?

It’s really just a matter of scale and intensity.

The underlying issues are the same: Who controls what?

The underlying cause of our conflicts

All of the conflicts in the world, whether small or large, boil down to the same basic issues: A desire to control other people, and a desire to have what is theirs for ourselves.

It starts in childhood with sibling rivalry and schoolyard fights.

It continues into adulthood, where the stakes are higher, and the damage is greater.

But it’s still all about power and possessions.

Those two unidentified passengers were fighting over who would control the boundary defined by the back of one passenger’s seat, and who would have the benefits of the space between its upright position and its reclined position.

The Ukrainian government and the pro-Russian separatist fighters are fighting over who will control the boundaries that define some of Ukraine’s eastern provinces, and who will have the benefits of those territories.

In both cases, a passenger airliner was downed as a result of the fight.

Yes, one is certainly much worse than the other. But in both cases, a border skirmish resulted in damage to many innocent bystanders.

When we humans are driven by a desire for personal power, possessions, and benefits for ourselves to the exclusion of others, the result is all the conflict, pain, and suffering that we bring upon one another.

And though these issues are commonly multiplied into thousands or millions of people fighting one another as nations and as groups, it all boils down to the individual decisions of each person within the group.

What will your decision be? Will it be to put yourself before others? Or will it be to consider the needs and wellbeing of others as being equal to your own?

Each of us will have to make that decision for ourselves.