Home › Current Events › When “Lying” is an Act of Love

When “Lying” is an Act of Love

Georgia State Trooper Nathan Bradley had a difficult task to perform. He had responded to a fatal car accident on Halloween evening, and now he and two other officers needed to notify relatives of the deaths of the couple who had died: Donald and Crystal Howard. As it turned out, their home was a mere quarter mile from the accident scene.

When Bradley and the other officers knocked on the door, they were greeted with a heart-breaking sight: four excited children all dressed up in their Halloween costumes, waiting for their parents to return home with a few more supplies so that they could go out trick-or-treating.

After consulting with his superior officer, Bradley made the decision not to tell the children immediately. He didn’t want to destroy Halloween for them. And he judged that it would be better if they heard the terrible news from a relative. The department did some quick research and contacted the children’s paternal grandmother, Stephanie Oliver, who lived eight hours away in Florida. She got on the road immediately.

But what to do with the kids in the meantime?

Officer Bradley decided to give the kids a fun and exciting Halloween, and let them find out about their parents’ deaths the next morning, from their own grandmother. He took them out in his patrol car, lights flashing, to get their favorite fast food. And he arranged a party for them at the station, where they also spent the night in the bedrooms where the police officers usually slept.

Even while his own heart was breaking for these kids, whose world was about to be turned upside down, he put on a smiling face, and let them have a special Halloween celebration.

You can read the whole story at People.com: “Georgia Trooper Cares for Orphans After Their Parents Are Killed in Halloween Crash: ‘It Just Tore Me Apart’”

Naturally, not everyone had a positive reaction to the officer’s decision and actions. Here’s the headline on the story at Gawker.com: “Should This Cop Have Lied to These Kids Whose Parents Just Died?”

And yet, there is a valid question behind all the cynicism. Was the officer really justified in not telling those kids that their parents had just died? Doesn’t that amount to lying to them? Don’t they have a right to know? And isn’t there a commandment against lying?

Lying vs. withholding the truth

First of all, as covered in the articles linked above, the officer, Nathan Bradley, was determined not to lie to the children. When they talked about their parents coming home soon, instead of saying anything one way or the other, he deflected, talking to them about how their grandmother was coming to see them.

So Bradley did not actually lie to the children. Rather, he withheld the truth from them. 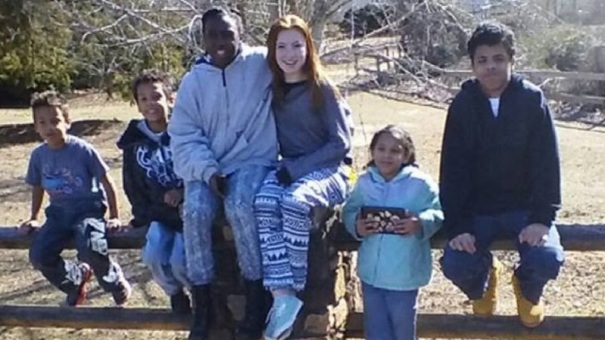 Donald and Crystal Howard with their four children

Bradley had every intention of making sure that they were informed of their parents’ deaths—and he never said anything about their parents still being alive. But he wanted to delay their receiving that information. And so, he simply didn’t tell them that their parents had died.

And he didn’t tell them because he cared about them. Having seen their excited faces and their costumes, he didn’t want their Halloween celebration to be destroyed.

He also believed that it would be better for the children to hear the news from someone they knew and loved, who could be with them and help them through it. That, he thought, would soften the blow, and be more compassionate to the children than if they heard of their parents’ deaths from strangers, and then had to spend many hours with social workers whom they didn’t know until a family member finally arrived.

As it turned out, their grandmother, who was the one to tell them about their parents’ death, is also the one they will be living with from now on. So when they heard about their parents’ death, they were already with a beloved family member who would be raising them from that point forward. They did not have to experience the insecurity of wondering what would happen to them.

You can read Nathan Bradley’s own account of what he did, and why, at the GoFundMe page that he set up to raise money for Donald and Crystal Howard’s funeral expenses, for the kids’ moving expenses, and for their future college education: “Children Lost Both Parents In Wreck.”

And yet, the perennial question remains: Is it ever okay to withhold crucial information, or even to lie to people?

What the commandment says

Many years ago, when I was teaching a pre-teen religion class at a church camp, I had the kids make a set of the Ten Commandments as a project.

Stone tablets were out of the question, so we made them of wood. And of course, there wouldn’t be space or time for the kids to write out the full wording of the Ten Commandments. So I told them they could write the short form.

But when one of the kids got to the commandment that said, “You shall not bear false witness against your neighbor” (Exodus 20:16), that was still too long for him. He said, “Can’t we just write, ‘You shall not lie’?”

After thinking about it for a moment, I allowed it. “You shall not lie” is short and to the point. And it’s a good message for kids.

But that’s actually not what the commandment says. It says, “You shall not bear false witness against your neighbor.”

The commandment certainly could have put a blanket prohibition on lying. But that’s not what it did. Rather, it says we must not bear false witness (a term for lying in a legal context) against our neighbor. In other words, what the commandment is conveying to us is that we are not to tell lies intended to harm our neighbor.

When lying is not acceptable

When we are evaluating what to say to someone, and whether to withhold information or perhaps even lie to them, we should ask ourselves the question of why we are contemplating this.

These and similar reasons for lying or withholding the truth certainly do violate the commandment not to bear false witness against our neighbor.

When lying may be acceptable

But what if our intent is not to harm others, but to show thoughtfulness and compassion to them, or to protect them from undue pain and suffering?

There are many situations in which telling the truth would do harm to our neighbor, or at least be unnecessarily rude. That’s why the commandment does not say, “You shall not lie,” but rather, “You shall not bear false witness against your neighbor.”

Having said that, we should still be very cautious about lying. Lies can have unintended consequences. And it’s easy to excuse our lies by claiming we had good motives, when there really was no good reason to lie. When in doubt, it’s best to read the commandment as, “You shall not lie.” If in some situation facing us we just can’t bring ourselves to tell the truth, then even if our motives are good and compassionate, it’s still better to withhold information rather than telling an outright lie.

When “lying” is an act of love

That is what Georgia State Trooper Nathan Bradley did when confronted with four excited children all dressed up in their Halloween costumes, whose parents had just died.

I don’t know about you, but I think he made the right call.

Remember, he encountered these kids when they were all amped up with excitement. Getting the news at that moment would have caused an awful emotional crash.

Life throws all kinds of unexpected situations at us. It’s not always easy to decide what’s the best thing to do. Bradley made a decision that he believed would be best for the children. And the great bond they formed with him, as seen in the news clip below, shows that rather than traumatizing the children by withholding information from them until a more opportune time, he gave them a great gift of compassion and love.

Nothing can take away the pain of this fresh tragedy in these children’s lives. They will sorely miss their parents, especially on holidays and at times of celebration. They will have many struggles coming to terms with their parents’ deaths and absence from their lives. And yet, Annette and I are comforted to know that God’s providence has placed loving adults around them to shepherd them through all these difficult passages, and guide them as they grow toward adulthood.