Home › All About God › A Star in the East

A Star in the East

After Jesus was born in Bethlehem in Judea, during the time of King Herod, wise men from the east came to Jerusalem and asked, “Where is the one who has been born king of the Jews? We saw his star in the east and have come to worship him.”

When King Herod heard this he was disturbed, and all Jerusalem with him. He called together all the people’s chief priests and teachers of the law, and asked them where the Christ was to be born. “In Bethlehem in Judea,” they replied, “for this is what the prophet has written, ‘But you, Bethlehem, in the land of Judah, are by no means least among the rulers of Judah; for out of you will come a ruler who will be the shepherd of my people Israel.’”

Herod called the wise men secretly and found out from them the exact time the star had appeared. He sent them to Bethlehem and said, “Go, make a careful search for the child. As soon as you find him, report to me, so that I too may go and worship him.”

After they had heard the king, they went on their way, and the star they had seen in the east went ahead of them until it stopped over the place where the child was. When they saw the star, they were overjoyed. On coming to the house, they saw the child with his mother Mary, and they bowed down and worshipped him. Then they opened their treasures and presented him with gifts of gold and frankincense and myrrh. And having been warned in a dream not to go back to Herod, they returned to their country by another way. 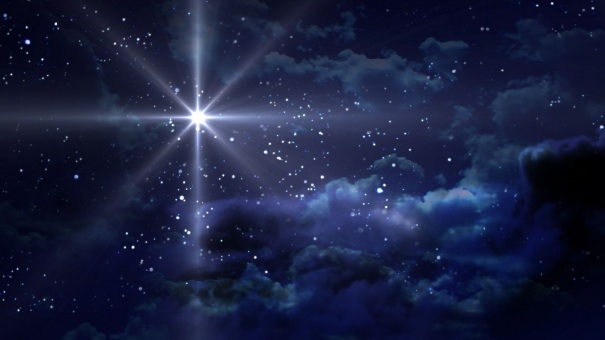 A star in the east

For the wise men, the entire journey began with a star. A tiny little point of light in the sky.

At least, we think of stars as tiny little things. But they are not. Each one of those “little stars” is a sun. Our sun is over a hundred times the diameter of the earth. Over one million earths could fit inside it. Those “little stars” that we see twinkling in our night sky are actually vast balls of intensely hot nuclear reactions reaching temperatures of over twenty-five million degrees at their core. If we were to travel too close to one of those beautiful little dots of light, we would first be burnt to a crisp, and then vaporized.

We see them as tiny points of light only because we are so far away from them. And that is good to keep in mind as we contemplate, with the wise men, the star that led them to Jesus. The star that we think of as tiny is, in fact, far larger and more intense than anything our experience has prepared us to imagine.

The first thing the wise men had to do in order to see the star was to look up. None of the priests and teachers of the law in Jerusalem saw the star. Their eyes were too focused on their books and their laws and their politics to even notice the sign of the new king’s birth. The wise men were willing to look up—and they saw a star in the east that would lead them on their journey.

And the wise men were willing to do something else—something that made them not merely smart, but truly wise. Once they had lifted up their eyes and seen the star, they were willing to follow it wherever it led them. They were willing to leave behind their familiar surroundings and travel to a distant land, seeking the one who was born king of the Jews. And so they went on their journey, taking weeks, months, perhaps even a year or more to reach a destination that was still unknown.

Consult the Word of God

On the way, we need to consult the Bible, and even the teachings of the church. The wise men did not find the child on their own. The star did not lead them directly to Bethlehem. To reach their destination, they had to consult with King Herod and the priests and teachers in Jerusalem. And in the end it didn’t matter whether those leaders were holy or corrupt. In the end, it doesn’t matter whether the church is full of hypocritical leaders and imperfect people. What matters is that the church, with its most precious possession, the Word of God, gives us the detailed guidance we need to focus our journey in the right direction.

Renewed in this knowledge—the knowledge of who Jesus is and where he may be found—we can once again see the star of spiritual insight guiding us right to the place within us where we can encounter the newborn Lord for ourselves. Because our meeting with the Lord Jesus Christ is not something that happens in the church, but in our hearts.

A star becomes the Sun

With joy, the wise men saw the renewed and brightly gleaming star, and it led them right to the house where the child was. This was no ordinary, physical star. A star in the physical sky could never have rested over a single house. This was a star seen with their spiritual eyes.

We, too, can see that star guiding us to the Lord Jesus if we are willing to lift up the eyes of our spirit to deeper things, and journey from our usual attitudes and habits toward its light. And if we do, in the course of our journey we will find, not a tiny little star, but a vast, all-encompassing Sun of Righteousness rising in the spiritual east of our lives with healing in its wings (Malachi 4:2).

(Note: This post is an edited version of a talk originally delivered on December 24, 2004.)

8 comments on “A Star in the East”