Home › The Bible Re-Viewed › What is the History and Importance of Bethel in the Bible?

What is the History and Importance of Bethel in the Bible?

Here is a spiritual conundrum posed by loganfields2:

Could you please explain to me in one of your posts the history of, and the importance of Bethel in the Bible! I would greatly appreciate it!

Thanks for the question, loganfields2.

The Old Testament town of Bethel (formerly named Luz) was one of the first places in the Bible where the Hebrew people met with God. The most famous of these encounters was Jacob’s dream of a stairway to heaven, with angels ascending and descending on it, and the Lord standing above it (Genesis 28:10–22).

Because this and several other early encounters with God happened at Bethel, it signifies our first beginnings of knowledge and understanding about God, heaven, and spiritual truth. And since this early knowledge of heavenly things comes in the first stages of our spiritual journey, when we are more earthly-minded than spiritual, Bethel represents a rather external and pragmatic sense of what God and spirit are all about.

One hint at this significance is that in the original Hebrew, Bethel means “house of God.” A house of God is an earthly, physical place (such as a church or temple) that is seen as the dwelling place of God. God cannot really be contained in a physical building or location (see 1 Kings 8:27), but we earth-bound humans often need something solid and physical to remind us of the presence of God, heaven, and spirit.

Before we dig deeper into the history and importance of Bethel, let’s get a visual on where it is located. Here is a map showing the position of Bethel in the Holy Land. It is west and a little north of Jericho, the first city that the Israelites conquered when they entered the Holy Land (Joshua 6). It is north of Jerusalem, which became the spiritual and political center of Israel. 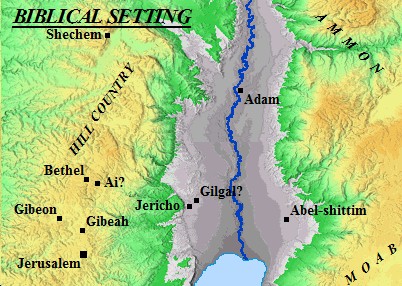 Bethel in relation to Jericho and Jerusalem

Bethel: A place for the Hebrews’ early encounters with God

Bethel is mentioned in over sixty verses in the Bible, representing over thirty distinct stories and prophecies, all of them in the Old Testament. Of course, we can’t cover them all in this article. So here is a list of some of the most important events that took place in Bethel:

If we put together all of these key stories about Bethel, here is the picture that emerges:

Bethel served the ancient Hebrews as an early point of communication with God, and of entry into the Holy Land—even if not always the first. As the religious, cultural, and political life of the Israelites increasingly focused on Jerusalem, Bethel faded in significance. However, when the northern kingdom of Israel seceded, Bethel became one of two major centers of idol worship in the north. This corruption sealed its fate in the Bible story. By the time of Jesus’ birth, Bethel had completely faded away as a place of importance. It is not mentioned anywhere in the New Testament.

Bethel: Making a deal with God

Just as Bethel took on importance in the early history of the ancient Hebrews and of the Israelite nation as a point of connection with God and heaven, so it takes on a similar spiritual significance for us early in our spiritual growth.

To illustrate the character of the connection with God and heaven represented by Bethel, let’s look at just one brief vignette, from the famous story of “Jacob’s Ladder.” After Jacob had that amazing dream of a stairway to heaven with angels ascending and descending on it, and God standing above, he made this vow to God:

If God will be with me, and will keep me in this way that I go, and will give me bread to eat and clothing to wear, so that I come again to my father’s house in peace, then the Lord shall be my God, and this stone, which I have set up for a pillar, shall be God’s house; and of all that you give me I will surely give one-tenth to you. (Genesis 28:20–22)

Do you see what Jacob is doing here? He’s making a deal with God! In essence Jacob is saying to God, “If you scratch my back, I’ll scratch yours.”

At the time Jacob had his first encounter with God, his life was a mess. He had just royally infuriated both his older twin brother Esau and his elderly father by tricking his father into giving him the all-important blessing of the first-born. Esau was planning to kill him as soon as their father died. Only the intervention of his mother Rebekah saved him from that fate. But in order to avoid death, he had to flee his home and everything he was familiar with, and go to a distant land to live with relatives he had never met. (For more on this story, see the article “Dan Gheesling: Judas, Jesus, . . . or Jacob?”)

With his life in chaos, Jacob finally began his relationship with God.

Isn’t that how we often start in our relationship with God, too?

When life is good, who needs God?

But when our life is a mess, and things are looking bleak, then we might start thinking, “Maybe I need God in my life after all.”

What’s the first thing we do?

In effect, we say to God, “If you’ll straighten out my life for me and give me what I need to get through this mess, then you can be my God. I’ll worship you and devote my life to you.”

In other words, like Jacob, we make a deal with God.

From deal-making to unconditional love and service

As a start on our spiritual journey, making a deal with God is not such a bad thing. It’s a heckuva lot better than ignoring God completely!

We’re saying to God, “I’ll believe in you and serve you, but only if you do the things I want you to do for me.”

That’s sort of like saying to your fiancé, “I’ll love you and commit my life to you, but only if you agree to provide half the household income, do the dishes, and mow the lawn.” What self-respecting person would agree to marry someone who said that?

Well . . . God does want to get a foot in the door of our life, so God actually will agree to a certain amount of deal-making early on in our spiritual journey. But that kind of quid pro quo attitude won’t carry us very far.

When we are ready to commit ourselves to loving and serving God unconditionally, then, as with the ancient Israelites, the rather superficial, deal-making relationship with God represented by Bethel will gradually fade away from our life, having done its job of getting us started on the pathway toward God.

In addition to being a response to a spiritual conundrum submitted by a reader, this is one in a series of articles on the theme “The Bible Re-Viewed.” Each article takes a new look at a particular selection or story in the Bible, and explores how it relates to our lives today. For more on this spiritual way of interpreting the Bible, see “Can We Really Believe the Bible? Some Thoughts for Those who Wish they Could.”

See also: What is the Meaning and Significance of Gilgal in the Bible?

92 comments on “What is the History and Importance of Bethel in the Bible?”