Tobias Bass and the Far-Reaching Power of Childhood Love 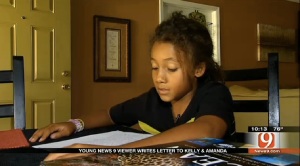 Tobias Bass had a problem. He wanted to run a 5K race with his older brother Titus, and he didn’t see how he could do it. You see, Titus has cerebral palsy. He can’t walk. And the boys’ single mom, a teacher, couldn’t afford a jogging stroller.

But Tobias didn’t let that stop him. Day after day he saw his brother looking longingly out the front window as other children played and rode their bikes outside. Tobias wanted Titus to be able to get outside and feel the wind on his face, too. So he took matters into his own hands.

What did he do?

He wrote a three-page letter to Kelly Ogle and Amanda Taylor, news anchors on KWTV News9, a local Oklahoma City TV news program. You can read the letter here. Among the many gems in the letter, he wrote, “My pastor said we have to be God’s hands and feet, but I’m going to be his legs, too.”

Ogle and Taylor were so moved by his letter that they not only ran a segment about it on their news broadcast, but contacted Oklahoma Able Tech, a provider of strollers and other equipment for disabled people. Soon Titus had a jogging stroller, and he and Tobias began training together for the 5K run.

The immediate impact of childhood love

By now, thousands of people have watched this moving television segment about Tobias Bass and his letter to News9.

It is a welcome lift to the spirits of many people whenever a story of love and kindness is so powerful and moving that it muscles its way into the steady stream of conflict, struggle, pain, and death that crams the news outlets day after day.

Tobias Bass just wanted to help his older brother, and maybe a few other disabled children who wouldn’t otherwise experience the excitement of running in a race. And because his love was so strong that it wouldn’t be stopped—even when his mother told him that it was not appropriate for him to write to the TV news—his love reached out and touched thousands of people.

The long-term impact of childhood love

Will those thousands of people remember this story in ten years? In twenty? Most of them probably won’t. And yet, it will have had its small but positive impact on their lives. It will have given their hearts and minds a small nudge toward expressing love and compassion in their lives.

However, there is at least one person on whom this incident will have a more profound and lasting impact.

That person is Tobias Bass.

In his letter, Tobias said that he wanted to be a pastor some day. He told News9 that he wants to be an army pastor so that he can minister to men dying on the front lines. If he does take that course in life, he will face with more than his share of suffering, pain, and death as an adult. And even if his life takes some other course, like everyone else, he will have his times of heartbreak and struggle—times when he’s ready to give up and throw in the towel.

That is where his childhood experiences of love and compassion, of giving and receiving, of supporting others and of being supported by them, will have their greatest impact.

You see, no childhood experience of love and understanding is ever wasted. Every experience of human closeness, compassion, and sharing of understanding and love when we are young becomes a building block in the foundation of our character and our life.

When Tobias Bass is facing the struggles of living in this fractured world, and the soul-struggles of those who walk a spiritual path, he will have the foundation he needs to remain strong in the face of those storms of life. This incident that for the rest of us is a heart-warming example of love and compassion will become for Tobias part of a solid foundation on which he can build an entire life of love and compassion in the face of any struggles or setbacks in life.