Dr. Zenko Hrynkiw: When a Hero Says he’s Not a Hero 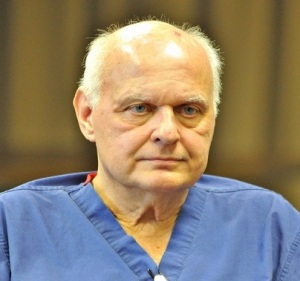 In our hero-worshipping culture, what happens when someone hailed as a hero rejects that label?

On January 28 of this year, during the snow storm that paralyzed much of the U.S. South, Dr. Zenko Hrynkiw received a call that an emergency brain surgery was needed to save a patient at the hospital where he works, Trinity Medical Center in Birmingham, Alabama. At the time, he was six miles away at another hospital, Brookwood Medical Center, where he had been assisting another doctor in surgery.

All in a day’s work.

Only this wasn’t an ordinary day.

Dr. Hrynkiw attempted to drive over to his hospital, but he didn’t get far. The roads were jammed with accidents, stuck vehicles, and roadblocks. So he got out of his car and started walking.

Along the way, he used his cell phone to keep in contact with Steve Davis, the charge nurse at the neurological intensive care unit at Trinity Medical Center, getting updates on the patient and giving instructions for medications and preparations for surgery. Without immediate surgery, the patient had a 10% chance of survival. Dr. Hrynkiw was not going to let him die—snowstorm or no snowstorm.

When AL.com picked up the story, Dr. Hrynkiw was hailed as a hero.

But he insists that there was no heroism involved. He was just doing his job. In a follow-up interview with AL.com, he had this to say:

Interviewer: Why do you think this is such a big story?

And when a Huffington Post interviewer bubbled over about how heroic his actions were, Dr. Hrynkiw brushed it off:

Interviewer: Everyone seems to be calling your actions “beyond heroic.” Do you feel like a hero?

Dr. Hrynkiw: No! I think this is much ado about nothing. I mean, basically, that’s my job, and you know, you gotta do what you gotta do.

He matter-of-factly described the events of the day and the patient’s almost certain death if he didn’t make it, adding that it wasn’t going to happen on his watch—as if walking six miles in the snow is just what an ordinary human being does in the course of his job.

And you know, he’s right!

Or at least, he should be.

Do we deserve praise for doing our job?

In a story traditionally called “The Parable of the Unworthy Servant,” Jesus offered this illustration:

“Suppose one of you has a servant plowing or looking after the sheep. Will he say to the servant when he comes in from the field, ‘Come along now and sit down to eat’? Won’t he rather say, ‘Prepare my supper, get yourself ready, and wait on me while I eat and drink; after that you may eat and drink’? Will he thank the servant because he did what he was told to do? So you also, when you have done everything you were told to do, should say, ‘We are unworthy servants; we have only done our duty.’” (Luke 17:7-10)

But what’s all the fuss about, he asks? Isn’t that just what I’m supposed to do?

He might ask each of us, “If you could save someone’s life by walking six miles in the snow, wouldn’t you do it?”

I hope the answer would be yes—assuming we are physically capable of it. And Dr. Hrynkiw is a regular walker, who keeps himself physically fit. Though he was a bit chilly at first in his hospital scrubs, he described it as “a beautiful day for a walk.” He warmed up fairly quickly. In fact, by the time he arrived at Trinity Medical Center, he was sweating! Then he briefly spoke to the family, and got to work, saving the patient’s life.

Don’t get me wrong. It’s great to recognize people who do a good deed.

But on this one, I’m with Dr. Hrynkiw. This is just what we human beings are meant to do for each other.

10 comments on “Dr. Zenko Hrynkiw: When a Hero Says he’s Not a Hero”