Home › Current Events › What if people actually did what Jesus says to do?

What if people actually did what Jesus says to do?

Now, don’t get me wrong. Beliefs are important. But let’s listen to how Jesus Christ himself defines a “Christian,” or follower of Jesus Christ:

I am giving you a new commandment: You must love each other, just as I have loved you. By this everyone will know that you are my disciples: if you have love for one another. (John 13:34–35)

Jesus Christ does not define Christians by their faith, but by their love.

Paul echoes this in his famous statement, “For now there are faith, hope, and love. But of these three, the greatest is love” (1 Corinthians 13:13).

Whoever has my commandments and keeps them is the one who loves me. (John 14:21)

In other words, a real Christian is not someone who believes correctly, but someone who loves other people and does what Jesus Christ says to do.

Let’s look at some real Christians whose stories have surfaced recently.

Jia Jiang, from Austin Texas, decided to undergo 100 days of “Rejection Therapy” in order to desensitize himself to rejection. His plan: each day for 100 days, he would make an outlandish request of someone in order to get rejected, so that he could overcome his fear of rejection.

His Day 3 plan: Go into a local Krispy Kreme donut shop and ask for interlinked donuts in the shape and colors of the Olympic symbol. Unfortunately for Jiang, shift leader Jackie Braun said “Yes!” She proceeded to do her best to fulfill this rather crazy request, even looking up the proper colors on the Internet when Jiang—who never expected to get a “yes”—couldn’t say for sure what the colors were. In other words, she went the extra mile for a customer who had asked her to do something just a little bit crazy.

Here’s the video, which has now gone viral:

Jia Jiang commented, “It’s only my third day and I have already failed, but I did so with such amazement and happiness. I am officially a fan of Jackie at Krispy Kreme.”

Here is the follow-up video:

Braun, for her part, didn’t think she’d done anything particularly special. In fact, she gave him the donut arrangement for free, because she had not been able to follow his request exactly.

A trivial thing? I don’t think so. And apparently others agree: the video showing her good deed has now been viewed over 3,000,000 times. In the course of her job, Braun was simply doing what she could to serve another human being and to make that person happy.

That’s what real Christianity is all about.

For more on Christianity in the workplace, see my article, “What Does Religion Have to Do with My Profession and My Daily Work?”

In his parable of the sheep and the goats (Matthew 25:31–46), one of the good deeds Jesus says we should do for others is to give clothing to people who are naked. And in the parable of the good Samaritan (Luke 10:25–37), Jesus held up as a true neighbor someone who went out of his way to help a man who had been robbed and beaten. 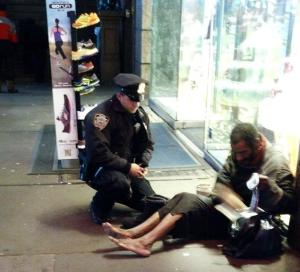 Instead of laughing, DePrimo took pity on the man. After a brief conversation with him, in which he found out the man’s shoe size, he went into a nearby Skechers store, and with his own money bought the man a pair of thermal socks and $75 insulated winter boots.

Unbeknownst to him, Jennifer Foster, a tourist from Arizona, snapped a picture of his good deed using her cell phone. She sent the photo to the New York Police Department (NYPD), which posted the photo on its Facebook page. This, too, went viral.

For his part, DePrimo didn’t think he was doing anything special—and he had no idea anyone was photographing him. Although suddenly thrust into the limelight, he called the experience “humbling.”

This is also what real Christianity is about.

Jesus said, “To you who are listening I say: Love your enemies, do good to everyone who hates you, bless anyone who curses you, and pray for anyone who is cruel to you” (Luke 6:27–28). 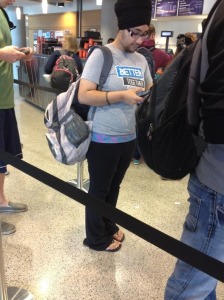 Balpreet Kaur, a Sikh woman who is a student at Ohio State University, was standing in line at the university library minding her own business when someone surreptitiously took this photo of her. The photo was posted on Reddit.com by a user with the handle “european_douchebag” under the caption, “I’m not sure what to conclude from this.” All sorts of insulting comments began pouring in due to the fact that Kaur has clearly visible facial hair.

When a friend told Kaur about the photo and thread on Reddit.com, instead of getting angry and retaliating, she took it as an opportunity to reach out and share her faith. In a beautiful and gracious post, she explained how not removing her facial hair was a part of her beliefs. “By transcending societal views of beauty,” she said, “I believe that I can focus more on my actions.” Far from castigating those who had insulted her in various ways, she thanked everyone for their comments, both positive and negative, saying that she has “gotten a better understanding of myself and others from this.” She even ended her post by apologizing for causing confusion and uttering anything that may have hurt anyone.

The original poster of the image posted a thorough and effusive apology.

And . . . millions of people heard the story—and learned something about the Sikh faith, and about a woman who returned love and understanding for the abuse that was heaped upon her.

I hope she would not mind my saying that based on her love, her thoughtfulness, and her actions, she is more Christian than most of the self-proclaimed “Christians” out there. She is actually doing what Jesus said to do.

What if everyone actually did what Jesus says to do?

3 comments on “What if people actually did what Jesus says to do?”