There is an ancient theory that the deeper we look into the nature of reality, the simpler it gets. The Greek philosopher Democritus (c. 460 – c. 370 BC) is often given credit for being the originator of the idea that matter consists of atoms, though his teacher and mentor Leucippus should probably receive that honor. Democritus, however, developed the concept of atoms into a well-developed theory of the nature of reality.

Today, physicists speak of subatomic particles. According to the original atomic theory developed by Leucippus and Democritus, however, this would be a contradiction in terms. The very word “atom” comes from a Greek word meaning “indivisible.”

In this ancient atomic theory, if we were to cut an object, such as a piece of wood, in half, and then cut one of the resulting pieces in half, and so on, eventually we would get to something that could no longer be cut. This would be an atom. Atoms were seen as the fundamental, indivisible building blocks of the universe. According to Democritus’s theory:

Democritus believed that all things, including subtle phenomena such as light, consisted of these indivisible, indestructible atoms.

However, it didn’t take long for an alternative viewpoint to be proposed. The Greek philosopher Aristotle (384–322 BC) proposed the theory that light is composed of waves that travel through the “element” of air. (Aristotle posited four elements: earth, water, air, and fire.)

Fast forward nearly two and a half millennia to today, and we’re still trying to figure out whether the phenomena we see around us in this material world consist of some sort of fundamental particles, or whether reality is more of a wave-like thing. Sometimes it looks like everything is made of waves; other times it looks like everything is made of particles. And in some famous experiments in which a beam of light is passed through two slits, light seems to behave like both waves and particles at the same time.

This has given rise to the idea that reality involves a “wave-particle duality.” Sometimes particles explain things better, other times waves do, and sometimes it’s necessary to put waves and particles together, resulting in the coined term “wavicle.”

In modern physics, our general experience is that as we look deeper and deeper into the nature of reality, instead of getting simpler, things only gets more complex.

Emanuel Swedenborg (1688–1772) offers some insights and theories that may help to put “wavicles” and the other strange phenomena that occur at the borders of physical reality into a more spiritual and universal perspective. Swedenborg began his adult life as a scientist and ended it as a theologian. As he saw it, science and theology are not in conflict, but form a unified whole.

The infinite core of being

First, let’s look at the question of whether things get simpler or more complicated as we look deeper.

Modern scientists are still searching for a particle that could be the fundamental building block of reality. The latest contestant for that honor is the Higgs boson. In an attempt to verify the reality of this theorized subatomic particle, the European Organization for Nuclear Research (CERN) spent nearly $9 billion (7.5b Euros) building the Large Hadron Collider (LHC) along the border between France and Switzerland, near Geneva.

A few months ago, the LHC tentatively confirmed that the Higgs boson does indeed exist. Yet as the increasingly expensive experiments in physics continue, instead of leading us to a fundamental, irreducible particle or force that is the basis of the universe, reality only seems to get stranger and more complex.

According to Swedenborg, that’s because reality does not, in fact, get simpler the deeper we look. Instead, it keeps getting more complex. And ultimately, it gets infinitely more complex.

Because the “fundamental particle” of the universe is none other than God. And though God is one in number, and in that sense is a “simple” entity, God also encompasses infinite states of reality. That may seem impossible to grasp. In fact, given that our minds are finite, it actually is impossible to fully grasp. But if we consider that the human body consists of about 100 trillion cells, we can begin to get some idea of what it might mean for God to consist of an infinite number of divine “cells,” or states of reality.

During the earlier scientific and philosophical period of his life, Swedenborg proposed a theory of the formation of matter that involved successively more energetic and complex particles stretching all the way from solid matter through various levels of reality, and ultimately originating in God. The general idea behind this theory, developed more fully during his later, theological and spiritual period, was that everything in creation is a slowed down and limited expression of the infinite nature of God.

This, according to Swedenborg, is why things just keep getting more complex the deeper we look.

If Swedenborg is correct, then even if we were to build a particle collider large enough to encircle the entire earth, we would never find a simple, fundamental particle that is the building block of all nature. Instead, we would simply keep finding more and more levels of complexity until we reached the limits of what physical instruments can observe.

If we accept the idea that reality is a multi-level affair that keeps getting more complex and more energetic the deeper we look, then we humans will never run out of new discoveries and new phenomena to investigate. The fact that God is infinite, and has created the universe in the image of the infinite, ensures that we will never know everything there is to know about reality. There will always be more to learn. That learning will not simply pile up more and more information, but will periodically jump to whole new levels of reality. 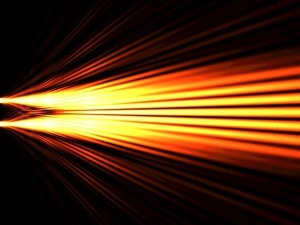 Now let’s take a spiritual look at the ancient tension between reality as particles and reality as waves.

Most scientists, of course, are looking for physical laws to explain the wave-particle duality and other strange, anti-intuitive phenomena that occur in nature and at the borders of our understanding of physics. And there is nothing wrong with digging deeper and deeper into physical reality. If Swedenborg is correct, and the physical universe is an expression of the deeper realities of God and spirit, then scientists will continue to discover a coherent, law-abiding physical universe no matter how deeply they look.

However, if we accept the reality of levels beyond the physical, we can gain a deeper appreciation of the meaning of such physical paradoxes as the wave-particle duality.

Let’s start right at the top of the ladder of reality.

These two together result in all of the power and activity of God.

So one simple, abstract way we can think of God is that God consists of love, wisdom, and action.

From the core love-wisdom duality of God, everything else in the universe flows. Therefore if we look at any spiritual or physical phenomenon, we will find that it, too, consists of a duality that functions on its own level in the same way that love and wisdom function in God—and that those two inseparable elements combine to produce all of the functions, activities, and effects of that phenomenon.

Are you getting some idea of how this relates to “wavicles,” or the wave-particle duality?

Together, the wave and particle aspects of physical matter as we now understand it combine to produce all the phenomena that we observe with our physical senses.

In other words, the wavicles now theorized by modern physics, and all of the effects that they produce, are yet another expression of the nature of God—who consists of an infinite union of love and wisdom, resulting in the many and varied phenomena of spiritual and physical reality.

Is that enough brain-bending for now?

Yes, yes, I know . . . this is all very abstract. In the next article, “Containers for God,” we’ll get a little more concrete: We will look at how the love-wisdom duality of the universe makes it possible for us to have a personal relationship with God, with one another, and with the universe in which we live.

18 comments on “Wavicles of Love”