Home › Science Philosophy and History › On Pluto, Atoms, and Other Things (such as Heaven) that Just Keep Getting More Complex

On Pluto, Atoms, and Other Things (such as Heaven) that Just Keep Getting More Complex

Before this flyby, all we had were very fuzzy images of Pluto only a few pixels wide. Because Pluto is so far away, so small, and so faint, that’s the best we could do. We had very little idea what it looked like. We didn’t even know exactly how big it was. Most scientists figured that Pluto would be a gray, heavily cratered planet, battered by several billion years of impacts by asteroids and comets.

When the first close-up pictures came back, what we found instead was a young, reddish, geologically active surface with mountain ranges and plains, and hardly any craters at all. 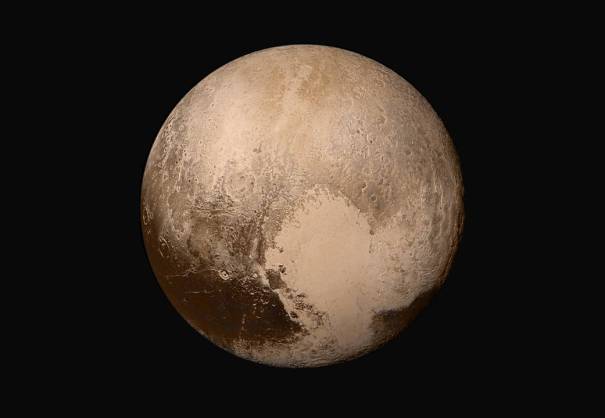 This has sent scientists back to the drawing board. They had assumed that such a cold, small, and distant planetary body would be nothing but an inert, geologically inactive rock. But what we discovered when we finally got close enough to take a good look was far different, and far more complex, than anything anyone had expected.

This seems to be a pattern in science. We think we’ve got a handle on things. We think we have a pretty good idea how things work and how they will turn out.

And then we look closer and dig deeper, and find that the reality is far beyond our wildest speculations. We discover that this universe is far more complex and interesting than we had ever imagined.

The evolution of the atom

Back in the fifth century BC, the Greek philosophers Leucippus (5th century BC, dates unknown) and his student Democritus (c. 460 – c. 370 BC) proposed the idea that everything in the universe was made of tiny, indivisible particles called “atoms.” In fact, the Greek word for “atom” means “indivisible.”

The influential Greek philosopher Aristotle (384 BC – 322 BC) rejected the atomic theory, saying instead that everything was composed of four elements, earth, water, air, and fire, which fill all space, and interact to produce all the phenomena we see. Aristotle’s theory prevailed, and held sway in Western society for almost two thousand years.

However, in seventeenth century Europe, as the Age of Enlightenment got underway, atomic theory had a major resurgence. Even Aristotle’s word “element” was redefined to mean atoms of a particular kind of material, such as hydrogen or helium. 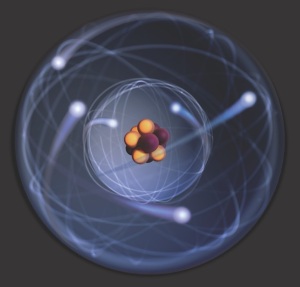 Diagram of an atom

But as science progressed, a funny thing happened to those ancient, indivisible atoms. We began to realize that atoms are not indivisible, but are composed of subatomic particles, such as protons, electrons, and neutrons. As the twentieth century wore on, we realized that even these subatomic particles were made of still smaller particles.

Long story short: it turned out that those simple, “indivisible” atoms were in fact incredibly complex affairs in which oodles of subatomic particles, energies, and waves danced around in staggeringly intricate patterns that we still don’t fully understand.

The universe keeps getting more and more complex

That’s just another example of how, when we take a closer look, our simple conceptions of the universe turn out to be totally inadequate to explain what we actually find.

We once thought that as things got smaller and smaller, they would get simpler and simpler. Instead, they just kept getting more and more complex. We keep building bigger and bigger particle accelerators to look deeper and deeper into the nature of subatomic matter and energy. And every time we do, we find that things are even more complicated than we thought. 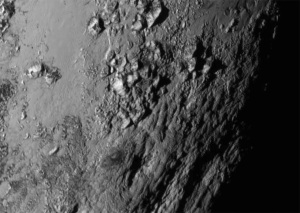 Mountains on the surface of Pluto

We also once thought that as we looked out into the universe, it would resolve into simple, repeating patterns of relatively uniform stars with relatively uniform planets orbiting them. Instead, so far no two stars or planets seem to be the same. Yes, there are certain patterns. But even in our own solar system, no two planets or moons have turned out to be very much alike. Each one has its own unique character.

What strange new worlds will we find out there orbiting all those trillions and trillions of other stars in the universe?

It’s the same story in all of the sciences. Physics, chemistry, geology, meteorology, biology . . . You name it, the more we study it, the more complex and fascinating it becomes. Every time we think we have some branch of science all figured out, someone makes a new discovery that sends us back to the drawing board.

The new discoveries don’t necessarily invalidate everything we’ve learned before. But they often make us realize that there are whole levels and realms of these sciences that we had not even been aware of before. Again and again, we’ve had to expand and extend our theories to account for what we find when we look more and more closely at the wonders of nature.

And as we make new discoveries, some of our long-held theories, such as Aristotle’s system of four elements, or the idea that the earth was created in six days approximately six thousand years ago, must go by the boards.

So what’s with all this science talk on a spiritual website?

Well . . . as it turns out, our conception of the spiritual universe has been going through a similar evolution from simple to complex.

In Old Testament times, our picture of the afterlife was very simple.

Basically, there wasn’t one.

By the time the New Testament rolled around, the idea of an afterlife had taken root in much of ancient Middle Eastern society, including the Jewish culture in which Jesus and his disciples lived and moved. Now, although God might bless you in this life if you lived a good life, or curse you if you didn’t, the true blessings and curses would occur in the afterlife, when those who believed in God and lived a good life would experience eternal happiness in heaven, while those who rejected God and lived an evil life would be punished eternally in hell.

This led to a simple, black-and-white picture of the afterlife that held sway in Christianity for many centuries—and is still believed by many today.

There have been other afterlife schemes as well in the Christian world. But most of them run along similarly black-and-white lines.

An afterlife to match the new complexity of human knowledge

In their groundbreaking book Heaven: A History (1995: Yale University Press) Drs. Colleen McDannell and Bernhard Lang state that Emanuel Swedenborg had a pivotal role in bringing about a changed view of heaven in Western society.

Previously, Christians had generally believed in a heaven of pre-created angels who spent eternity in endless contemplation and praises of God, and fallen angels, led by Satan, who endlessly warred against God for human souls. This simple picture of the spiritual realms worked very well throughout most of Christian history.

But when the Enlightenment came along, and new ideas about the universe and our place in it began piling in on us one after another, that old, black-and-white view of the spiritual world began to look increasingly simplistic and implausible.

Swedenborg’s most popular book, Heaven and Hell, originally published in Latin in 1758, offered a brand new and much more complex view of the spiritual world. His view of the afterlife was more appropriate to this new era of exponentially expanding human knowledge

Instead of the simple, black-and-white realm of relatively uniform angels and devils playing their assigned roles of good and evil, Swedenborg pictured heaven and hell as vast, complex landscapes reflecting all of the amazing variety and diversity of human life that we see in the many regions and nations of earth—not to mention the inhabitants of many other habitable planets throughout the inconceivably large universe we live in.

Yes, angels in heaven do enjoy a more immediate and profound presence of God. But heaven consists of communities of thoughtful, intelligent, loving, and skilled people who love to serve one another and give one another happiness in as many different ways as there are different people.

And yes, devils in hell do hate God and fight against God. But they, too, have incredibly varied lives in which they pursue their own evil schemes, and sometimes even succeed before inevitably reaping the pain and punishment that is built right into their selfish and materialistic desires and actions.

In other words, the realms of heaven and hell are every bit as complex and varied as human society and culture here on earth. In fact, they are far more complex and varied than anything we have experienced in this material realm.

Our eternal homes in heaven

Under the old conception of heaven, ordinary people often thought that heaven would quickly get very boring. Who could stand all that constant harp-playing and God-praising?

But in Swedenborg’s conception of heaven, we are the very same people, with the very same character, likes, dislikes, quirks, ideas, beliefs, skills, relationships, and so on that we have developed here on earth.

In short, if we choose love over hate, and selflessness over selfishness here on earth, our life in heaven will be every bit as complex and varied as our life here on earth.

And we will never run out of new things to discover.

The New Horizons mission to Pluto has revealed an entirely new and unexpected world. Even its brief flyby of Pluto at over 30,000 miles per hour has provided us with a level of detail on that formerly mysterious body that is amazing scientists and non-scientists alike. And we’ll continue to get more and more amazing pictures and data for another sixteen months to come.

Pluto is only one small world in one tiny section of space. And it is revealing so many surprises that scientists will be studying and puzzling over these new revelations for decades to come.

If God has built that much complexity into even the smallest planet-like bodies here in the material universe, how many more amazing things has God built into the vast spiritual realms for us to discover?

The spiritual world that Swedenborg, and now many near-death experiencers, have opened up for us is a vast and exciting realm. It is an entire expansive universe of its own—one in which we can live forever and never run out of new discoveries to make, new concepts to explore, new levels of love and relationship to experience.

6 comments on “On Pluto, Atoms, and Other Things (such as Heaven) that Just Keep Getting More Complex”