Home › Popular Culture › Beyonce and Jay-Z Reveal the Secret: How to Start a Lasting Marriage

Beyonce and Jay-Z Reveal the Secret: How to Start a Lasting Marriage 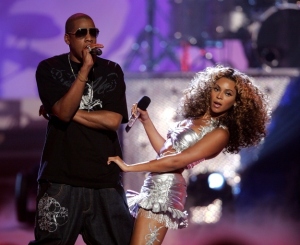 Beyonce and Jay-Z performing together

What’s the secret? Why do some celebrity marriages go the distance, while others quickly crash and burn?

Various theories have been put forward for short-lived “Hollywood marriages”:

Let’s take a look at just one of those factors . . . but a very important one:

How is the relationship formed in the first place? What stages does it go through on the way to marriage?

That’s where Beyoncé and Jay-Z have a secret to share.

Beyoncé (Knowles) and Jay-Z (Shawn Carter) are known for being a close, happy, and solid couple. They are also known for being a very secretive couple. They spent years dodging questions from the media about their relationship. Far from the stereotypical glitzy celebrity wedding splashed across the tabloids, they were married quietly in April of 2008 in an unannounced private ceremony attended only by family and close friends. Beyoncé and Jay-Z have been a couple for ten years, and married for five. But little has been known about their private life together.

Recently, they have opened up a little more about their relationship. In an interview with Oprah Winfrey this February, Beyoncé spoke about what her marriage to Jay-Z means to her, and how the two of them began their relationship:

About half a minute into this clip, Beyoncé says:

“We were friends first,” she said, “for a year and a half, before we went on any date.”

Now that is not your typical “Hollywood marriage.”

In fact, it’s completely at odds with popular scenes of romantic love: a couple falls madly, passionately in love at first sight, jumps into bed together . . . and eventually, if the relationship sticks, starts planning a fancy wedding.

Beyoncé and Jay-Z spent a year and a half talking to each other on the phone before they even went on their first date!

And they consider that year and a half critical to the stability of their marriage.

What was happening during that year and a half of talking on the phone?

You see, there are two ways to build a relationship:

The same two ways can also be expressed as:

When a relationship starts with the body, and eventually (maybe) gets to the soul, that relationship is being built from the bottom up, or from the outside in. The same is true of relationships that start from externals such as money (Is he rich?) and social status.

When a relationship starts with the soul, and eventually gets to the body, that relationship is being built from the top down, or from the inside out. The same is true of relationships that start based on having common goals and values, such as a shared commitment to a particular religious faith or a shared dedication to serving humanity in a particular way.

Of course, most relationships do start with some sort of physical connection. Our souls communicate with one another through our bodies. So we usually have to meet and see each other before we can get to know each other’s loves and values. Even couples who meet online commonly share pictures of one another early on so that they can visualize the person they are talking to. Before Beyoncé and Jay-Z spent that year and a half talking on the phone, they had seen each other in the popular media, and had probably met in person.

The question is, where does the relationship go from there? Does it go right into a physical and sexual connection? Or does it move upward and establish a spiritual connection first?

Biology and economics: a shaky foundation for marriage

By now it seems fairly well established in our culture that money does not provide a good foundation for lasting marriage.

Yes, a certain amount of personal responsibility and dedication to earning a living is a key element in a stable relationship. It’s hard to have a happy marriage when you’re homeless.

However, if having plenty of money were a good foundation for marriage, Hollywood marriages should be famous for their longevity, not for their brevity. A quick look at the tabloids and the society pages shows that many of the rich and famous are also famous for having stormy, short-lived marriages that end in pitched battles over money, property, and custody.

It seems less established in the popular mind that biology (read: sexual attraction) isn’t a very good foundation for lasting marriage, either.

So let’s take a look at our biology.

We’d be fooling ourselves if we didn’t recognize that sexual attraction is a powerful force in our psychology. Throughout the animal kingdom, the drive to reproduce the species can override every other instinct. The males of many species will fight to the death to achieve or maintain sexual access to females. The females will fight to the death to protect their young from predators.

Whatever superstructure of rationality and spirituality we humans may possess, physically we are animals. We humans have the same biological drives as every other animal, including the reproductive drive. We have a powerful, innate urge to find mates and have sex with them.

Wouldn’t such a powerful, deep-seated drive provide a stable foundation for a lasting marriage?

A look at the animal kingdom says no. While some species do mate for life, the reproductive instincts of most species drive them to couple only briefly with the opposite sex so that fertilization can take place. Then they go their separate ways. If the reproductive drive that rules biology were a sufficient foundation for lasting relationships, lifetime mating should be the rule, not the exception, in the animal kingdom.

However, unlike most animals—which often seem to mate quite casually and then forget all about it—we humans find sexual intercourse to be intensely pleasurable (when it is good), and seek it out for its own sake.

There are biological reasons for this as well. For a classic book arguing that all human behavior, including our complex sexual behavior, is biological and evolutionary in origin, see The Naked Ape, by Desmond Morris.

Our sexual behavior is tied in with our biology. But even the biology of sex comes from a higher, spiritual source. From a spiritual perspective, sex is intensely attractive and pleasurable for us not only because it is the means God has provided for us to reproduce ourselves, populating the earth with people and heaven with angels, but also because sex is a physical expression of the deepest and most spiritual love that can exist between two human beings.

The problems come when we push spirit aside and put biology in the driver’s seat.

Sex is intensely pleasurable. Once we start, we don’t want to stop. And sex does create intense bonds between two people. When we have shared that level of intimacy with another person, it creates a connection.

But to be brutally honest, any two sexually developed human beings can have sex with each other, regardless of their inner compatibility or lack thereof. To put it bluntly, any penis can slide into any vagina.

It is possible, even easy, for us to have sex with people with whom we have nothing deeper in common. That physical intimacy can create powerful bonds between two people who really don’t belong together. And as the classic 1962 Neil Sedaka song says, “breaking up is hard to do.”

The reason sex has traditionally been considered permissible and appropriate only after a couple gets married is not because God will damn us to hell if we have sex before marriage. Technically, the commandment is against adultery. And adultery exists only if one or both partners is already married to someone else.

Rather, the traditional religious prohibition against sex before marriage entered human culture due to a recognition that relationships that jump into sex too early have two strikes against them right from the start.

Sex and physical intimacy just isn’t a very good starting point for lasting marriage. Relationships that start from the bottom (physical sex) and try to work their way up toward a deeper (spiritual) connection tend to get stuck along the way, and never make it to the top.

Then what is a good starting point?

Beyonce and Jay-Z happy together

Beyoncé and Jay-Z got it right on this one: “We were friends first, for a year and a half, before we went on any date.”

Friendship is an inner connection. Usually it is based on common loves, common beliefs, and on engaging in activities together that both partners enjoy.

In other words, friendship is a spiritual connection.

Lasting marriage is founded, not on biological reproductive drives, but on an inner, spiritual union between two people. That union needs to be sought out and developed before the biological drives kick in.

Do you want to have a lasting marriage?

While there is no surefire way to achieve it (marriage is complicated!), starting out the relationship in the right order—from the top down, and from the inside out—will make a marriage much more likely to last.

Building marriage from the spiritual to the physical

As these become clearer in your own mind, seek out similar beliefs, values, and goals in the people you meet and the people you date. Share your passions and ideals with them, and listen as they share theirs with you. When you find someone who expresses similar loves, similar faith, similar goals, then you have the possibility of a lasting relationship.

The important next step is to take the time needed to explore one another’s beliefs, loves, values, and goals more deeply. Take the time to find out if they are compatible not just on the surface at first glance, but right to the depths of your soul.

Don’t muddy the waters by getting too physical and jumping right into bed together. That will only cloud your judgment and cause confusion as your biological drives kick in. Spend time talking, doing enjoyable things together, getting to know one another more and more deeply.

If you find over time that you have an inner connection and a sense of oneness with each other that keeps growing without your needing to have sex to feel it, then and only then can you have confidence that yours is a true spiritual connection that can lead to a lasting marriage.

That inner connection, together with the long-term commitment and trust of marriage, will then flow from the top down, giving you a sense of inner joy and contentment even in the inevitable struggles of marriage and of life.

And your patience in letting the spiritual connection develop first will be rewarded with a depth of expression and sharing in your physical and sexual intimacies that is possible only when the two of you know and feel in your souls the deep spiritual connection that you have with one another.

Here’s how Beyoncé put it:

And about those who are in too much of a hurry:

7 comments on “Beyonce and Jay-Z Reveal the Secret: How to Start a Lasting Marriage”