Okay, this isn’t exactly late-breaking news, but it’s too good to pass up!

Christians have been predicting the end of the world for, oh, about 2,000 years now.

Science fiction writers have been creating doomsday scenarios for over a century.

Scientists respond that these things just aren’t going to happen. The world is going to keep turning for several billion years to come, they say, and the universe will last even longer.

So I couldn’t help but chuckle when I heard that Stephen Hawking, one of the most famous scientists in the world, has his own doomsday scenario. And he says it could come at any time, with no warning.

The “God particle” could destroy the universe!

Yeah, I laughed, too!

Evangelical Christians think that God is going to destroy heaven and earth, and create new ones in their place. It’s going to happen any day now!

Serious scientists would never believe such a ridiculous thing.

Nope. For physicists, it’s not God, but the God particle that could destroy the universe any day now!

Okay, okay, scientists don’t like the name “God particle.” They prefer to call it the Higgs boson.

And in a book of his lectures published about a year ago, titled Starmus, he got his revenge: The Higgs field, which is associated with the Higgs boson, could destroy the universe! So you can keep your hundred bucks, Gordon Kane!

In the preface to his book Hawking says:

The Higgs potential has the worrisome feature that it might become metastable at energies above 100 [billion] gigaelectronvolts (GeV). This could mean that the universe could undergo catastrophic vacuum decay, with a bubble of the true vacuum expanding at the speed of light. This could happen at any time and we wouldn’t see it coming.

In other words, it’s possible that the field associated with this recently discovered particle could suddenly start wiping out all matter in a bubble that would expand so fast that there would be no warning. Suddenly our world and everything in it would just vanish into nothingness.

For more on this possibility, see these articles:

The universe isn’t going away any time soon 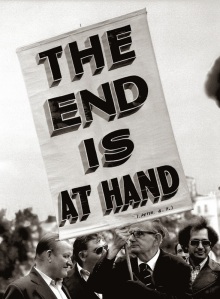 The World is Coming to an End!

Now, before you sell everything and buy a fancy red sports car so that you can go out with a bang, not every scientist agrees that the universe might vanish at any instant.

Even Stephen Hawking thinks that if it does happen, it’s not likely to happen for billions and billions of years.

Many scientists believe that it won’t happen because there are forces and phenomena that we still don’t fully understand that are keeping the universe stable. Perhaps it’s that mysterious dark matter. Perhaps it’s antimatter. Or perhaps it’s something else that we haven’t even discovered yet. But if the universe has managed to remain stable for this long, they reason, it’s likely that something is holding it all together, and that it’s not likely to go Pop! now or in the future.

So keep your day job, don’t run to the storm shelter, and don’t cash in your stocks and bonds just yet. It seems that this world of ours is a tough old beast, and isn’t going away any time soon.

And what about those Christians who say the world is coming to an end?

I wouldn’t listen to them, either.